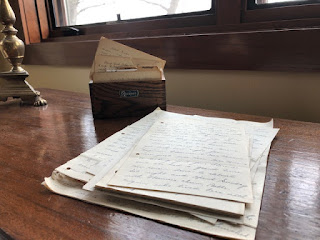 Once again my kitchen was filled with delicious cooking aromas. My table was scattered with yellowed letters written in now-faded ink. My grandmother’s wooden recipe file box stood open with several spattered recipe cards pulled halfway up.  For this special meal I’d selected her meat loaf. Her cooking was legendary. She got this recipe in 1912 from her soon-to-be mother-in-law. I’d also pulled the card for her best friend Kate’s sour-milk devil’s food cake recipe. Its ingredients were ready to stir up.  I hoped I’d stir up the spirits of those women and my new, spirited, friend as well, for one last conversation.   Luck was with me.

What is that old letter you’re reading?

Oh, I'm so glad you’ve come. I wanted to share this letter with you. My grandmother wrote it to her mother back home on the Pennsylvania farm. It is dated November 3, 1920. The "Herbert" she writes about was my grandfather.

“Hurrah for Harding! I helped elect the new President.  I went with Herbert at 6:45. They have voting machines here for the first time for this election. They voted a little more than 60 an hour.”

So there’s the impact of your effort. The result of the more than fifty years of hardship and struggle.

I do not look back upon a hard life. I was continually at work because I enjoyed being busy. Had this never-ending toil made me wretched in mind or body, I have no doubt that in some way I would have gotten out of it.   And I wasn’t alone.

True, at first there were just a few of us. Mrs. Stanton and Lucretia Mott began with their 1848 Seneca Falls Convention that brought us the Declaration of Sentiments toward woman’s rights and was signed by sixty-eight women and thirty-two men. Over the years more and more woman joined in the struggles. The Grimke sisters, Sarah and Angelina, were very early supporters. Later Lucy Stone, Antoinette Brown Blackwell, Anna Shaw Howard, Rachel Avery, Ida B. Wells, Carrie Chapman Catt, Alice Paul, and as the years passed, hundreds, even thousands, more women and some men joined as they worked in their communities and for the national effort.

What was the turning point in your work for woman’s suffrage?

Certainly, when states that entered the Union allowed woman’s suffrage. First we had Wyoming, which awarded women full suffrage as a territory in 1869 and refused to enter the Union as a state in 1890 unless women were allowed to keep the vote. Other states joined with fully enfranchised women during that decade—Utah, Colorado, and then Idaho.

What about the formation of the National-American Woman Suffrage Association?

Ah yes. It was good to have the long-standing internal discomfort settled when the two wings of the suffrage movement finally merged back into one strong group. There had been a division shortly after the Civil War. Questions over approach and tactics led to discord. Leaders of the New England-based American Woman Suffrage Association practically shunned the National Woman Suffrage Association that Mrs. Stanton and I headed.  Finally we joined ranks in 1890. Our joint membership was seven thousand. I headed this NAWSA until 1900. Membership kept growing and growing.

How did it feel to retire from active leadership of the group you founded?

Retirement from the presidency was an 80th birthday present to myself. As I said at the time, I wished people could realize with what joy and relief I stepped down. I said that, although I was good for another decade of work for the cause, still I had been telling myself for a couple of years : “Let it go ... let go … let go.”

So I did let go of the machinery part but not of the spiritual part. I had been in this movement for nearly fifty years and gained a certain notoriety, at least. That reputation enabled me to get a hearing before the annual conventions of many great national bodies to urge upon them the passage of resolutions asking Congress to submit a Sixteenth Amendment forbidding disenfranchisement on account of sex. This is the work to which I meant to devote myself henceforward.

So what happened to the organizational part?

Carrie Chapman Catt was unanimously chosen to be the new president. We confidently voted to put the work in her younger hands. The progress of the movement could not now be impeded either by the going out of one person or the coming in of another. It would go ahead by its own momentum. We established a fine headquarters on the twentieth floor of the American Tract Society building at Nassau and Spruce Streets in lower Manhattan. It was a new structure, completed in 1895.

Looking ahead, what are your views on women and their roles?

I think what I said at the turn of the nineteenth century still rings true. There is still work to be done. This article appeared in the Rochester Democrat and Chronicle newspaper on January 2, 1901. Here’s what I said. “We women will be up and doing. I can hardly sit still when I think of all the great work waiting to be done. Above all women must be in earnest, we must be thorough, and fit ourselves for every emergency. We must be trained and carefully prepare ourselves for the place we wish to hold in the world. More and more does the world demand specialists, and woman must rise to her opportunities as never before.

“The Twentieth Century will see as great a change in the position and progress of woman in the world as had been accomplished in this century. But it will cease to cause comment, and will be accepted as a matter of course. There will be nothing in the realm of ethics in which woman will not have her own recognized place, and all political questions and all the laws which govern us will have a feminine side, for woman and her influence in making and shaping affairs will have to be reckoned with.”

May I ask you one last question? What did you want to accomplish the most?

My greatest ambition was to assure the right to vote. And I wanted to see discrimination against women eliminated. I wanted to see a tidal wave sweep us over, even though it might sweep us back. Our work was exactly like the tide of the ocean. We are swept forward and back.  I found that the older I got, the greater power I had to help the world. Our movement is like a snowball—the farther it is rolled, the more it gains.

We little dreamed when we began this contest, optimistic with the hope and buoyancy of youth, that half a century later we would be compelled to leave the finish of the battle to another generation of women. These strong young women took our place and completed our work. There is army of them where we were just a handful. 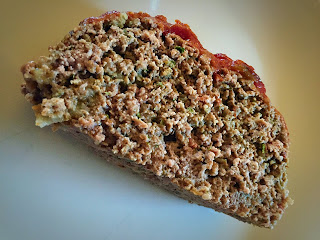 NOTE: If you can’t get your butcher to coarsely grind the beef for you. You can chop it in a food processor.

Preheat oven to 325 degrees F.  In a medium mixing bowl combine the beef, cold suet, bacon, or butter, salt, and pepper.  In a small bowl combine the crackers, milk, and eggs and then add to meat. Form into a loaf and place in baking dish large enough to have space around the sides to accommodate the addition of boiling water. Dust the top with flour and pour boiling water around, to come 1/2-inch deep. Bake until done, about 1 1/2 hours. 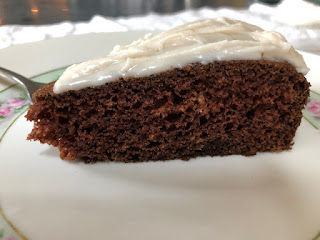 To make one layer. Double recipe for a two layer cake.

Preheat oven to 350 degrees F. Grease and flour one 9-inch round cake pan.  In a measuring cup combine the milk and vinegar and set aside for the milk to sour. Roughly chop the chocolate and combine with the boiling water. Set aside for the chocolate to melt. In a medium mixing bowl stir the soft butter, sugar, and egg until well blended. Stir in the baking soda and flour.  Stir in the chocolate and water and finally the soured milk.  Spoon the batter into the pan and bake until the center is firm to the touch and the cake has begun to just pull back from the sides of the pan, about 20 minutes. Cool in pan for about 5 minutes, then remove from pan and finish cooling on a cake rack. Note: This is a very delicate cake, so take care when removing from the pan.

In a 2-quart saucepan combine the milk and butter. Heat until the butter is just melted. Remove from heat and gradually stir in the confectioner’s sugar and beat until the icing is smooth. Stir in the vanilla extract.