Susan B. Anthony was born on February 15, 1820. After a long and successful career fighting for temperance, abolition of slavery, and woman’s rights, she died a month after her 86th birthday.

Her own words are the best description and assessment of her career.

During those [early] days people who did not know me thought I was a witch with horns. That has all passed now and I am accorded nearly the same privileges as men in my country. The first quarter of my career was a stormy one—so tempestuous, in fact, that I have often asked myself how I have managed to retain the equable temperament and sweet disposition with which God has endowed womanhood. I did it through philosophy. When I started on this career I realized that the task I had assumed was a stupendous one, and I trained my mind to cool, philosophical reflection. I have been a profound student of sociology, and what I have accomplished has been done by patient and persistent effort which few men could sustain.

I have had but one object before me all my life. As soon as my mind began to unfold I saw the injustice of the system which deprives woman of the natural rights of the human being. I did not shrink from this like other women. I consecrated myself to the work of reforming the system. I have lived to see what few reformers have been spared to enjoy—a realization in large part of the reformation which I inaugurated. 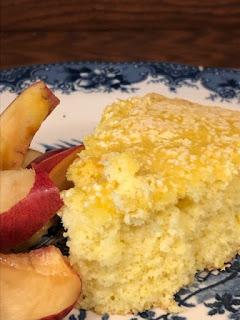 This is a simple cake to make. However, the method for this recipe is almost more important than the ingredients.  So don’t panic at the length of the directions.

The cake is best made by hand. No need to get out the electric mixer.

I usually don’t sift flour for baking. But it is essential for this recipe’s success.

Preheat the oven to 325 degrees F.  Lightly butter the bottom of a round 8-inch cake pan. Cut a piece of regular white paper to fit in the bottom, and then butter that as well.

Sift about a cup of flour and set aside--you will only need part of it.

Put the 3/4 cup sugar in a gallon zipper bag and go back and forth several times with a rolling pin to make smaller sugar crystals.

Put the egg whites in a small-ish bowl with a narrow bottom and enough room for the egg white volume to increase five times.

Put the egg yolks in a medium bowl. Gradually add the sugar, stirring with a flexible spatula. Set aside so the sugar will begin to dissolve. Add the flavoring and stir to blend.

Whip the egg whites with a balloon whisk or mechanical egg beater until they forms stiff peaks, but are not dry, and set aside.

Measure out the 2/3 cup of flour needed for the recipe from the sifted cup and return the rest to your flour supply.

Stir the egg yolk mixture for a couple of minutes until it thickens and turns a lighter yellow. Begin gently mixing the flour and egg whites into the batter in four or five additions, beginning with flour and ending with egg whites.  If the egg whites separate during the process, just give them a few more stirs to beat them up again.

Gently scoop the batter into prepared pan. Bake until firm and the cake has pulled away from the side of the pan, 20 – 25 minutes. Cool on a wire rack for about 10 minutes. Then run a knife around the edge, flip the cake over to drop it from the pan, pull the paper from the bottom, and place the cake upright on rack to finish cooling.

Cake is best served the next day and will keep nicely for 3 or 4 days well wrapped in the refrigerator,

Finally – Susan’s serving instructions are critical – “Do not cut the cake with a knife. Break it into pieces.” I use two forks to pull it apart into lovely sections.