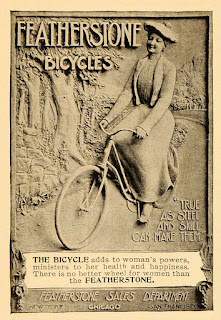 With spring in the air, I was looking through my fragile issues of several late nineteenth-century and early twentieth-century woman’s magazines. I wanted to find perfect recipes to make the most of the first-coming fruit in my garden—the rhubarb.  Strawberries, raspberries, blueberries would follow. But there is nothing like the first tang of a perfect rhubarb sauce.

An agreeing voice came from behind my ear, as though she were looking over the pages with me.

Fruit is my favorite thing to eat.  I really try to have it for all three of my daily meals. I will pay extra for the first strawberries of the season or the last of the peaches. We grew dozens of different fruits on our family farm outside Rochester.

Then Miss Anthony’s attention was called to the several advertisements along the sides of the pages.

Look at all the advertisements for safety bicycles!  The Featherstone “adds to woman’s powers, ministers to her health and happiness. There is no better wheel for women.”  That language certainly captures my opinion of the benefits of what were the newest bicycles back at the end of the nineteenth century, especially for women.

What do you mean?

Well, as I said in my 1896 interview with reporter Nellie Bly, “I have to tell you the bicycle has done more to emancipate woman than any one thing in the world.”

Did you ride one?

Oh my, no.  It is fine exercise. But I was not ready to take up the sport. In 1904 Mabel A. Potter, writing for the Woman’s Home Companion, asked what “kept me young.”  I was eighty-four when she interviewed me. I reported that I took a daily walk in the blocks around our neighborhood and in winter I liked to take a broom and sweep snow from the walks around our home.

I love cycling, but would you explain what you meant by emancipating?

Being able to ride a bicycle was an important step to physical freedom. On them woman could travel about in clothing designed for ease of activity—no hoops, no corsets, no floor-sweeping skirts. When I began my efforts for woman’s rights, I was ridiculed  for wearing a “Bloomer” outfit—a full skirt that stopped below my knee over full trousers that, certainly, covered my entire leg. By 1900 such liberty-giving costumes were becoming commonplace.

Of course, over my fifty years of efforts we’ve made so much progress on a woman’s ability to be successful in work and to manage her own finances and well being.  When we started our work, conditions were dreadful. A married woman was under the total control of her husband. Every penny she earned, any money she inherited was his. He had the total rights to their children, even if he mistreated her, cheated on her, was a drunk. On the rare occasions that divorce was obtained, the husband retained total parental responsibility by himself.  By the end of my work, in 1906, most of the 45 states had passed laws giving married women their legal rights. In the workplace women were denied equal pay. I saw it myself when male teachers made many times more than we women did.

We still have to make progress with equal pay.

True, but in education woman had made more progress by the time I was coming to the end of my work. By the turn of the nineteenth century, a woman could attend most schools in the nation. Some 36,000 women were enrolled in state universities and private colleges by 1906. Many more occupations were open to us. We could argue in front of the Supreme Court, we could tend to people’s health as physicians and tend to people’s souls as ministers. We were working in the trades.

And, now, we are celebrating the 100th anniversary of obtaining the right to vote.

Yes, and as I said repeatedly, this is the right that makes all other rights—and progress—possible. 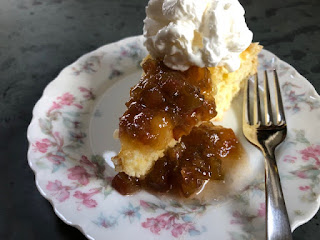 Rhubarb Jam
This makes “a relishing dish for lunch.”

Patience is the key to making this simple recipe successfully.
Slice the rhubarb across the stalks into pieces1/4-inch thick. If the stalks are wide, slice them in half lengthwise as well.  Mix the sliced rhubarb and sugar. Let the mixture sit for at least 8, and up to 24, hours in a cool place, even in the refrigerator. Give it a stir now and then as the rhubarb juices begin to be released. Or if you put them in a zippered freezer bag, you can just smoosh them with your hands.

When it is time to make the sauce, pour the rhubarb, accumulated juices, and any remaining undissolved sugar into a heavy pot or pan with a 10- to 12-inch bottom. As unconventional as it may sound for jam making, I use my big frying pan. It has sides 3-inches high, very important for keeping the bubbling preserves from boiling over.  You want the mixture to come into even contact with the heat. Begin cooking over medium heat, stirring frequently. DO NOT walk away from the stove. A lot of steam will come off the mixture during the first few minutes. As the juices begin to thicken, they bubble up and could overflow, or stick. This can happen as fast as it takes to look at a text. So don't do that either. Continue cooking and stirring until the juices have thickened and the pieces of rhubarb look translucent. When you pull a silicone spatula or spoon across the bottom, the jam moves to the sides and you can see the bottom of the pan.   Cool and enjoy this tart jam with seemingly candied pieces of rhubarb. Store in the refrigerator for up to two weeks. Serve at room temperature, or slightly warmed -- especially over ice cream!

Note 1: What matters here is the ratio, by weight, of the rhubarb to sugar. You also don’t want to make much more than a pound of rhubarb at a time. It will take longer to cook and the pieces won’t be as intact which is the key to the whole delightful flavor.

Note 2: Jam will continue to cook as it cools. So if you are uncertain, err on the side of pulling it off heat sooner rather than later.

Note 3: AND If the jam gets too thick as it cools, simply stir hot water into it a tablespoon at a time.

Recipe adapted from The Household  May 1900