Can you imagine a man elevating the ability to bake a cream biscuit above being educated?

I looked up from making sour cream by stirring vinegar into some half-and-half as an indignant Susan B. Anthony spoke.

And can you imagine that opinion would come from my oldest sister Guelma’s husband Aaron McLean!

That certainly seemed an odd exchange of values.  I asked her to tell me more as I began rolling and cutting the biscuits.

Our parents followed the Quaker belief that girls should be as well and widely educated as boys. When our local teacher in Battenville refused to teach me long division, my father started a school for his children, the community, and his mill employees. He hired the best teacher he could. And I learned long division. When I was fifteen I began teaching as a tutor for a family nearby, earning a dollar a week and board. Then I moved on to teach in a district school in Reid’s Corner for a dollar fifty a week, where I was boarded around among the families of my students.

I read that you went away to boarding school.

In 1837, when I was seventeen, Father sent me to join my older sister Guelma at the Quaker boarding school near Philadelphia. At Deborah Moulson’s Seminary we used maps and globes to learn geography, studied the elements of astronomy, natural philosophy, and chemistry along with literature, mathematics, and writing. I looked through a microscope to see the minute particles of on the wings of a butterfly and more.

Why did you leave?

Father and his business partner, Judge McLean, had taken advantage of the generous credit offered by the banks of the day. Then the national economy changed. The success of the mills was at risk. Throughout the fifteen years he had built his business success, Father traveled to New York, Philadelphia, and Washington, DC, selling the fabric his cotton mills made. In 1837 he could see significant changes. He wrote home: “Today I passed through Pine Street and have not seen one single box or bale of goods of any kind whatsoever. Last year at this time a person could scarcely go through the street without clambering over goods of all descriptions. … a bale of goods cannot be sold at any price.”

Guelma and I had to leave school. We came home in the spring of 1838 and were both fortunate to find teaching positions nearby. Eventually, I took the position of assistant at a boarding school in New Rochelle between May and September 1839. We sent home any spare money we earned.

In 1839 the once-generous banks foreclosed on the Battenville mill and shops. Everything we had was sold to try and recover Father’s business debts. Mother’s brother, our Uncle Joshua, purchased some of our belongings and returned them to us.  Father had two smaller mills and owned some timberland in a nearby town called Hardscrabble. The family moved there in March 1839. Soon, Father was made postmaster, and he led the effort to change the name of the town to Center Falls. Guelma married Aaron McLean, the son of Father’s business partner and they stayed in Battenville.

Over the next five years from the time I was 20 until I was 25, I taught wherever I could in schools and as private tutor. I continued to send every spare dollar home to help with the family expenses. During my breaks from teaching, I came home to help run the house. I wrote in my diary of washing, spinning, weaving, quilting, doing large bakings of 21 loaves of bread during a day. We boarded the mill hands and also often had travelers drop by. What was now our home had previously been a wayside inn. Some even considered it a tavern. We would feed them and send them on their way without any alcoholic beverages.

Did your parents build a community here, too, the way they had in Battenville?

Life was much more of a struggle here. Sill our parents participated in the community. Father even stepped outside his strict adherence to Quaker beliefs. Our mother had not been raised in the Quaker simple life. She sang and danced as a girl. So when the young people from the village asked if they could have dances in what had been the hotel’s third-floor ballroom, my parents agreed, but we weren't allowed to attend. Father went into the mills and worked alongside the men. In the winter he employed a crew to go into his woods and cut timber. Mother would cook  and bake great quantities of provisions—bread and cake, pork and beans, boiled hams, and roast chickens and go to up to the logging camp for a week at a time.

While I was teaching I was also studying.  I spent one winter with a cousin in Danby, Vermont. There I was able to make a study of algebra.

When I returned to Center Falls I often prepared Sunday dinners for the gathered family. And here is where my brother-in-law Aaron made his opinion known. One day I served some nice cream biscuits and Aaron—in the manner of giving me a compliment—remarked, “I’d rather see a woman make such biscuits as these than to solve the knottiest problem in algebra.” I could not help but respond, “There is no reason why she should not be able to do both.”

But the family ended up in Rochester, New York. How did that happen?

In the end, all of our efforts were not enough. This mill, too, was not able to withstand the economic conditions.  Father decided to return to farming. In November 1845 we made the journey on the Erie Canal to Rochester and a 32-acre farm outside town. Uncle Joshua had held back mother’s inheritance from their parents. The laws stated that a married woman could not control any money, whether she earned it or inherited it. So, despite the bankruptcy, my parents could afford to buy the farm.

In April 1846 when I was 26, I was offered the position as head of the Woman’s Department of the Canajoharie Academy in that town some 200 miles from Rochester, near Albany. I boarded with my married cousin Margaret, the daughter of Uncle Joshua.  I would no longer have to send money home to try and save the family business from foreclosure. 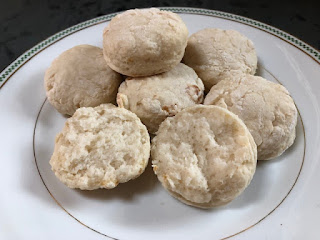 These lovely biscuits are light, yet have a sturdy texture. Lots of crevices where jam, butter, or even gravy can ooze into deliciousness.  The recipe works with commercial sour cream, or you can make your own by adding vinegar to half-and-half.  Because the dryness of flour can vary, you might need to add a bit more liquid or flour to get a dough that will pat out easily. Go easy—just a half tablespoon at a time.

Sour your own cream by combining:
1/2 cup half-and-half
1 1/2 teaspoons white vinegar
and setting mixture aside for 5 minutes before combining
with flour and other ingredients

Preheat oven to 425 degrees F. Lightly grease a baking sheet about 11 x 15 inches.
In a medium mixing bowl combine the flour, salt, cream of tartar, and baking soda. Stir in the commercial or homemade sour cream to form a stiff, but not sticky, dough.  If using commercial sour cream, you may need to add a bit more milk – a half tablespoon at a time.  For homemade, you might need a bit more flour. Flour your rolling surface well. Put the dough on the flour, pat it down gently then turn it over  and pat it out to ½-inch thickness. Cut with small biscuit cutter, 1 ½ inches in diameter. Dip the cutter into flour before cutting each biscuit. Bake until lightly brown on the bottom and firm, about 10 to 15 minutes. Don't over bake. The biscuit tops remain a creamy white.

Recipe adapted from A Young Housekeepers Friend by Mrs. Cornelius (Mary Hooker) published in Boston in 1846