1826-1837 Among the Richest Families in Battenville, New York


I had just finished brewing a second cup of coffee and settled down with my collection of antique cookbooks, considering a treat to bake.  Once again I heard the voice and then her image came into view.

If you have some molasses, I’ll teach you how to make 1830s “training day gingerbread.”

Of course, I always have molasses and pulled the jar from the cabinet.

You’ll need flour, ginger, a bit of butter, boiling water, vinegar, and baking soda—back when we made them in Battenville, we used saleratus for leavening. It was all we had at the time. Baking soda came along a while later. You just need a small bowl for mixing and a rolling pin.

I assembled the ingredients and equipment. Miss Anthony talked me through the recipe as she continued the narrative of her youth.

My father was a pattern for capitalists. After the success of his first cotton mill in Adams, Massachusetts, Judge John McLean sought him out to reinvigorate industry in his hometown of Battenville, New York. We moved there in 1826, when I was six.

So your father made his mark in this new place?

Yes, indeed. I was six when we moved there and during the dozen years we lived in Battenville, I saw from the actions of my parents how to create a successful enterprise.. Father built a large mill for spinning cotton and weaving cloth. He also refurbished the gristmill for grinding wheat and corn into flour and meal. By the time he was finished, he would own six mills. He built a machine shop, established stores and a school. He created a vigorous community of workers and town people. He built houses for the workers, and every one had a garden. He managed everything in the town except a tavern. He was a devout Quaker and a lifelong believer in refraining from hard alcoholic beverages. His workers were required to sign a pledge of “total abstinence from distilled liquor.” He made an exception for a little wine and cider. Most of the mill men and women also belonged to the temperance society he founded.

The Quaker faith and temperance were an important part of your family life.

Yes, Father was firm in his decision and absolute in his dedication to the temperance tenets of his Quaker faith. He always put his beliefs before his business. He refused to sell alcoholic beverages in the mill’s general store. The local farmers were skeptical. They would come into the store and look around for the barrels of rum and other alcoholic beverages. They peered behind the counter, went down to the cellar, and finally declared that “they would not trade at a temperance store.” They soon discovered that Father had the best goods at the lowest prices. His reputation for “square dealing” brought them around.

Although we were one of the leading families in town, we all worked. It took six years for Father to establish the mills and businesses and set them on firm footing. At first we lived with the McLeans and next in a rental house two doors down. Then in 1832, Father set out to build a fine new house overlooking the river and the mill. He installed a kiln so workers could make the bricks on site. Over the months of construction, Mother, my older sister Guelma, and I prepared basket lunches and made boiled dinners for these homebuilders. We cooked meals and baked pies for the mill hands, too. It was ready for us to move into in 1833.

Can you describe your house?

It was wonderful and would be our home for the just the next six years. It had two stories and fifteen rooms with a large third-floor garret. There were four fireplaces—one at each end of the two main floors. The curving stairway was right at the entrance. Father equipped the house with all the modern conveniences. It was filled with our family. Mother’s parents had sold their farm and come to live with us.  And my parents had three more children—Mary was born in 1827 with Eliza in 1832. My youngest sibling, Jacob Merritt, came along in 1834, but Eliza died that same year.

Our parents raised all six of us to be self-sufficient. Not only with work but also with thought. They believed that women should be as able as men were to support themselves. We all had the same schooling. I even worked in the cotton mill for two weeks when father needed an extra hand.

Tell me more about that, please.

My younger sister Hannah and I both wanted the job. We drew straws. The winner would get the job and split the earnings with the loser. I spent two weeks working alongside the other young women. My job was a spooler. The mill was a wonder, using the water force of the Battenkill River to power the machines that converted cotton into thread and then wove those threads into cloth.  On the outside of the building, the big power wheel dipped into the Battenkill, turning up and around.

So it looked kind of like a Ferris wheel on the side of the building?

Exactly. The wheel connected to a shaft running through the mill. That shaft had an array of sturdy leather belts connecting to a variety of machines. As the shaft turned, the belts turned and so the power was transferred to the individual machines. Working as a “spooler” was similar to working on Mother’s spinning wheel. Just as I converted wool strands into even threads on Mother’s wheel, the machine I operated in the mill spun cotton thread onto 144 large spools at a time. I needed to watch to make sure this happened smoothly, and then remove the full spools from the frame. I earned the same pay as the other “spoolers.”  With my half I bought Mother a set of six china cups and saucers.

By this time, our gingerbread crackers had finished baking. So I asked Susan to tell me about them and how they were served.

We threw an old-fashioned “house raising” to build a number of homes for the mill workers.  Mother, Guelma, and I made doughnuts and this special New York treat—“training day gingerbread.” It was a regular part of the annual voluntary militia exercises held all over New England in the fall. The practice dates back to the end of the War of 1812, in which England had invaded the newly established United States, burned many government buildings in Washington, DC, and attacked New York, Baltimore, and New Orleans.

When Father announced that he would not serve the typical alcoholic beverages at the house raising, his business partner, Judge McLean, feared that no one would come, but father was confident that his alcohol-free event would succeed.

In addition to the gingerbread and doughnuts, we served lemonade, tea, and coffee. Everybody came, things went off finely—not an accident during the whole day—and all went home sober having learned, for the first time, that there could be a house-raising without liquor.

With this lifelong example and inspiration, temperance would be the first public cause that I would take up. 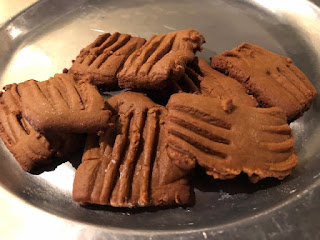 Preheat oven to 350 degrees F. Lightly grease baking sheet(s) or line with parchment paper.
Note: This recipe does not use eggs. Also the amount of flour will vary depending on humidity. So you might need as much as a quarter of a cup more. But do try to limit the amount you add. You are seeking a soft dough to make a crispy cracker-like treat. It not very sweet, but is just right plain or for dunking in coffee, tea, or milk. Or as an unusual base for cheese.

In a medium mixing bowl combine the flour, baking soda, and ginger, mixing with a fork. Measure the molasses into a heatproof glass measuring cup. Add the butter and boiling water. Stir until the butter is melted. Add the vinegar to this cup, mix, and then stir this mixture into the flour mixture. This dough should be soft and not sticky. If necessary, add a bit more flour a tablespoons at a time, perhaps as much as a quarter of a cup. Lightly flour your work surface and roll the dough out into a rectangle, about the size of a piece of paper (8 1/2 by 11 inches). Very lightly dust the rolled dough with flour, so the surface is not sticky. Cut into 1-inch strips. Press the tines of a fork into the strips to create raised ridges and then cut into one-and-half-inch rectangles. Place on prepared baking sheets and bake until firm, about 8 to 10 minutes.

Note: For more molasses flavor, mix one tablespoon molasses with a teaspoon of hot water and brush over gingerbread before baking. The last little bit that stuck in the measuring cup is frequently enough to have the water added and do the job.


Return to Overview Essay
at May 13, 2019
Email ThisBlogThis!Share to TwitterShare to FacebookShare to Pinterest