1848-1854 Susan Appeals for Temperance and Agitates for Equal Pay 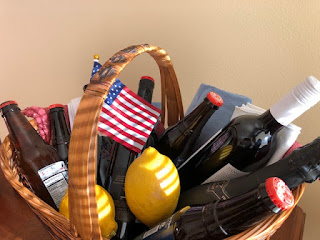 My preparations for our July Fourth party were all in hand. The back deck was fully decorated with red white and blue bunting. The picnic foods were ready. The beer and soft drinks were chilling in large ice-filled tubs, and the bottles of wine stood ready to open.

What are you serving?

The force behind her question startled me.  I responded quickly. We’ve got picnic foods--hot dogs, barbeque sandwiches, some chicken wings, a few salads, vegetables, dips.

Yes, but what are you offering your guests to drink?

Oh my! We can do better than this. As I said back in 1849 “Would that we could find some means by which our Brothers and Sons should no longer be allured from the right by the corrupting influence of the fashionable sippings of wine and brandy, those sure destroyers of Mental and Moral worth.” Instead we often served old fashioned lemonade and even some barley lemonade. I'll show you how to make them and I’ll give you more of my temperance message.

We moved into the kitchen and, while I gathered the lemons, sugar, and pearl barley, Miss Anthony set the scene.

I began my activist work with temperance and then continued with anti-slavery, equal pay, and woman's rights.  I could never forget my first speech. Of course, I had been speaking in public as taught my students in Canajoharie and led their regular recitations demonstrating what they had learned to their parents and the community. But this was the first time I spoke out in front of an audience about a cause I believed in and where I hoped to persuade people to adopt the cause of temperance.

It was quite the event! I was escorted into the meeting hall by Charlie Webster, a member of the organizing committee.  The room was beautifully festooned with cedar and red flannel. On the south side was printed in large capital letters made from evergreen the name of “Susan B. Anthony.” I scarcely know how to conduct myself amidst so much kindly regard from the two hundred people who were in attendance. There was an elegant supper and on top of one table was a pyramid pound cake with a beautiful floral bouquet which Charlie handed to me.

Do you remember what you said?

Certainly, I remember as I shared these same thoughts with audiences many times. I directed my appeal to the women saying that it was the women who are most aggrieved by “the foul destroyer’s inroads into society.” I asked the question: “How are we to accomplished the end desired?” And answered it:  “not by confining our influence to our own home circle, not by centering all our benevolent feelings upon our kindred, not by caring naught for the culture of any minds, save those of our own darlings.” I concluded: “Ladies! There is no neutral position for us to assume. If we sustain not this noble enterprise, both by precept and example, thin is our influence on the side of intemperance. If we say we love the Cause, surely, and then sit down at our ease surely does our action speak the lie. And now permit me once more to beg of you to lend your aid to this great Cause, the Cause of God and all Mankind.”

Well, that’s quite a dramatic speech and call to action.

Yes, women not only had long suffered from the destroyers of mental and moral health, they also lapsed into temptations of drink. As I cautioned some of our “thoughtless females friends whirling in the giddy dance with intoxicated partners at their side, and more tan this, see them accompany their reeling companions to some secluded nook and there quaff with them from that Virtue-destroying cup, yet we hope that our weekly resort to these meetings has not been in vain.”

You met weekly? Was it difficult to gain an audience? My kitchen companion laughed.

We did surround the rhetoric with entertainments to encourage attendance. We organized a series of suppers and festivals to spread the word and raise money. For one meeting the  newspaper reported:  “The five long tables were loaded with a rich variety of provisions, tastefully decorated and arranged.”

Were you the only people holding meetings and parties to move people away from drinking?

Oh my no! Temperance efforts had begun to sweep the country. When President Polk and his wife Sarah moved into the White House in 1846 they were non-drinkers. Although they did continue to serve wine at official dinners as was expected.

How did that sit with temperance advocates?

Although my group advocated for total abstinence, there were those who held that temperance meant restrained use of alcoholic beverages. Wine and beer were allowed from time to time.. After all doctors did prescribe alcohol.  In local society membership  lists, those who believed as I do in never drinking had a “T” marked after their name to designate they were “Totally” against consuming alcohol.

What about your next cause, that of rights for women teachers?

You are right. Temperance wasn’t enough after the way I was treated at the New York State Teachers Convention. By the time of the 1850 convention I had been teaching for more than 15 years. I started by taking over classrooms when my father had the cotton mill in Battenville. My last teaching position was in Canajoharie, New York, nearly 200 miles from our family farm outside of Rochester.   I taught there for four years beginning in 1846.

Why did you decide to speak up?

Through my career I had seen male teachers, and there were many of them, get better year round teaching jobs and be paid better than women. When I tried to speak at the 1853 convention, I was, at first denied the right to speak to the assembled 200 men and 300 women teachers. And that action from the chair only strengthened my determination.  After a half-hour deliberation by the managers of the convention I was finally allowed to speak.

Do you remember what you said?

I spoke to the issue of pay equity,   State reports showed that of the eleven thousand New York teachers fourth-fifths are women.. Yet two thirds of the annual $800,000 budget are paid to the male teachers.

I began by addressing the complaints of the male teachers. They complained about the lack of respect.  "Do you not see that so long as society says a woman is incompetent to be a lawyer, minister, or doctor, but has ample ability to be a teacher that every man among you who chooses this profession tacitly acknowledges that he has no more brains than a woman? And this, too is the reason that teaching is a less lucrative position, as here men must compete with the cheap labor of women."   And I called the question: "Wold you exalt your profession, exalt those who labor with you. Would you make it more lucrative, increase the salaries of the women engaged in the noble work of educating our future Presidents, Senators, and Congressmen.

Did you speak at other conventions?

Yes, I made it my business to speak at every annual convention until 1862 when my work became more dedicated to the causes of anti-slavery during the war and to woman’s rights.

All my work over the years led logically from one cause to another. Equal rights  are worth working for and celebrating.

Adapted from The Practical Cookbook Mrs. Bliss of Boston 1850

Wash the lemons, dry, and then grate the yellow part of the peel on the fine side of a box grater. Squeeze the juice from the lemons. Combine with peel, water and simple syrup into a sauce pan. Simmer for about five minutes.  Strain to remove peel, if desired, and add more sugar to sweeten if necessary. Chill before serving.

Combine and heat over low heat, stirring just until the sugar is dissolved. You do not have to bring it anywhere near a boil. Set aside and chill before making lemonade.

Combine the sugar and water in a small saucepan. Simmer, stirring frequently, until the sugar dissolved.  Set this simple syrup aside to cool.  Grate the peel from one of the lemons and then, using a lemon juicer or upside down small cup, squeeze out the pulp and juice of both lemons.  In a large pitcher combine the simple syrup, lemon juice, and barley water. Chill before serving.

Combine the water and barley in a medium saucepan. Simmer until the barley is tender, about half an hour.  Strain to remove the barley and reserve for another purpose such as soup.  Sweeten the barley water with half an ounce of white sugar.

Lightly beat the egg whites until soft peaks form and set aside.

In a medium mixing bowl thoroughly combine the butter and sugar. Stir in the egg yolks and then half the flour. Mix in the milk and then the remaining flour and nutmeg. Gently fold in the beaten egg whites. Note: If they have begun to separate, give them a quick whisking before combining with batter.

Pour batter into prepared pan and bake until lightly browed, about 35 minuets.

Makes about 11 cup cakes 2 ½-inches across. You can also bake this  pound cake-like  batter in smaller gem pans or as mini loaves.