A rich, meaty aroma filled the kitchen as I carefully lifted the now-tender piece of beef from the stew pot’s simmering liquid. I placed it in the center of my platter, surrounding it with the vegetables I’d boiled along with it—turnips, carrots, onions, potatoes, and parsnips. A New England Boiled Dinner at its finest.

Once again, the firm voice came from over my shoulder and her image emerged through the steam rising from my stove.

I got into trouble over boiled dinner once. I hurt my mother and was sorry for a long time afterwards.

I was about five years old. My older sister Guelma and I would stop on the way home from school at our Grandmother Anthony’s home. Frequently she had a huge pewter platter with foods leftover from noontime dinner—boiled beef or pork and vegetables. We loved it. At home, I complained that the dinner Mother cooked was not as good as Grandmother Anthony’s. I don’t remember that I was punished or even admonished. The look on her face was lesson enough and I felt ashamed.

Will you tell me more about your childhood?

Until I was six, we lived in Adams, a small farming community in the Green Mountains of Berkshire County in western Massachusetts. My parents Daniel and Lucy grew up on adjoining dairy farms. When they married, father’s family gave them the lumber to build a home on land from the Reads, Mother’s family. So we had the good fortune to live next to both sets of grandparents.

Ours was not the typical farm family. Father was interested in technology and business, not cows.  His energy turned to bringing modern industry to our valley. He soon determined that Tophet Brook, running near this home, was just what he needed to power a cotton mill. This was a new technology, and father jumped right in, building a small mill with 24 looms powered by a wheel driven by the Tophet. This was the first cotton mill in the region and provided employment for both the “mill girls,” who ranged in age from about 15 to 35, and who operated the spinning and weaving machines, and men,  who kept that machinery in good order. Like father, these young men and women sought opportunity for work off the farm.

Father spent his days running the mill and finding markets for the cloth. Mother was responsible for keeping house and preparing the meals, including those for the eleven mill girls who lived with us.

What do you remember most?

My memories are filled with delicious food made by both my grandmothers.
Guelma and I took advantage of our nearby grandmothers’ kitchens. We would stop on our way to school for a breakfast treat of cider toast. Both grandmothers made it by toasting traditional New England brown bread made from rye and corn meal by the hearth and then breaking it up into a flat pewter bowl.  Then rich cider was poured over it. We stirred it with a spoon and positively devoured it. Some mornings we would have a related dish—“coffee”--made by pouring boiling water over just the toasted and crumbled crusts used like coffee grounds. We would sweeten it with maple syrup. We had hasty pudding, a thick cornmeal mush, with butter and more maple syrup.  At Grandmother Anthony's house there was always fresh cheese curd. She was famous throughout the region for the cheese she made from their rich cows’ milk and cream.

Four of us children were born in the first ten years of our parents’ marriage. Guelma in 1818, I was born in 1820, Hannah in 1822, and Daniel R. in 1824. When Daniel was born, we girls spent weeks with Grandmother Read.  I don’t have a memory of those days, but the family all said that’s when I learned to read. During those early years I also learned how to sew, weave on Mother’s narrow loom, and spin on her old-fashioned wheel. As I grew older I pieced quilts and stitched samplers. And I learned to cook.

Did you enjoy cooking?

Oh my, yes.  When we finally did move to a farm, I was 18 and cooked many of the special Sunday dinners for guests who came to talk temperance and, increasingly, anti-slavery. Abolitionist Frederick Douglass often came. In later years, I was able to cook even though I spent most of my time traveling across the country speaking for woman’s rights. I cooked for Mrs. Stanton’s children while she wrote papers, pamphlets, and speeches that I would deliver. I nursed family members and friends, preparing special foods for them. One of the joys when my younger sister Mary and I finally began keeping our own home, was that I was in charge of the meals.

I have memories of Mother’s kitchen. It was modern for the day with an open hearth and a large brick bake oven built into the side. She spent hours making the meals not only for us, but also for our boarders.

Why did you leave this idyllic place?

We all loved the Green Mountains in northwest Massachusetts. Years later I returned for a family reunion and was moved as I saw the old houses still standing. But Father saw a larger opportunity. His first mill was such a success that he became well known for his innovations and dedication to the best standards for running a business. Judge John McLean came to offer my father the opportunity to operate an even bigger mill in Battenville, New York, about fifty miles northwest of Adams. So in 1826 when I was six, my parents packed up the family. Father left the operation of the first mill in the hands of his brother. We moved away from our four grandparents and great-grandfather Anthony.  Father and Mother began to build a community anew.

This one pot-meal began as a classic simmered all day in a kettle hanging over a bed of embers from an open-hearth fire. Today it can be prepared on top of the stove, in the oven, cooked in a slow cooker, or one of the newest electric pressure cookers. Its ingredients are easily varied to account for family preferences and available meat and produce. Back in Susan's childhood the vegetables essential for the right flavor would have been stored in the family's root cellar. Carrots, turnips, parsnips, potatoes, and beets, all kept well from harvest until spring, carefully packed in layers or sand with the potatoes secure in baskets on the cellar shelves. Garden herbs suited to beef, corned beef, or pork were picked at their peak in September and hung up to dry in bouquets.

3-4 pound beef roast--round, chuck, sirloin, or brisket
allow about 1/2 pound of meat per person, more if you want leftovers.

assorted root vegetables, peeled and cut into uniform pieces
carrots and parsnips--about 2-inch long pieces
turnips and white potatoes -- cut in quarters, unless really large then cut in eighths
or small "B" size potatoes and early turnips kept whole
head of cabbage -- cut in eighths
beets, cooked separately then peeled and cut in quarters  OR make into Pickled Beets

Place the meat in a very large pot that has a lid. Cover with at least 3 inches of cool water, allowing enough room for the water to boil. Bring to a boil, lower the heat to simmer, cover but leave the lid slightly at an angle for the steam to escape.  Cook until tender, about 45 to 60 minutes per pound on top of the stove. Cooking time will depend on the thickness and shape of the meat and the cooking method you choose. About half an hour before the meat is done, add carrots, parsnips, turnips and the potatoes.  When the meat is fork tender remove from the pot and place on a warm platter, cover, and let rest. Check vegetables for tenderness, remove if done. Put the cabbage in the pot and continue simmering until it is tender, about 10 minutes.

To serve carve the meat across the grain and surround with vegetables.

NOTE: All the cooking times are approximate. Much will depend on the size and shape of the vegetables (skinny carrots cook faster than thick ones) and the shape of your meat impacts how quickly it will cook (flat wide meat cooks more quickly than a dense round cut).  Of course, how how high your "simmer" is will influence cooking times, too. So, if the dish does cook faster than you expect, you can always pull the meat or vegetables out of the pot and keep warm. The meal also reheats beautifully. 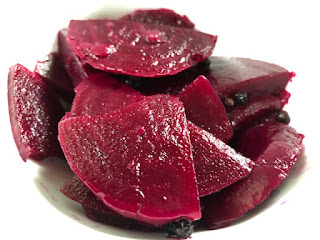 Several period cookbooks call for cooking the beets separately when making Boiled Dinner as their bright red color would discolor the other vegetables simmering in the pot. Other cookbooks praise the value of pickles served at every meal--"It goes without saying," wrote Miss Eliza Leslie, author of several popular mid-nineteenth-century cookbooks. In 1844, H.R. Skinner touted pickles in The Family Doctor's Guide to Health describing their usefulness on the high sea: "Sailors should never venture upon a voyage without a large jar of pickled onions, beets, and carrots."

The 1856 compendium Inquire Within for Anything You Want to Know offered this recipe. It is an assertive pickle that adds great relish to a Boiled Dinner and is easily made.

Cut the tops off the beets and wash the roots. Put them in a large pot, cover with water, and boil until tender. While the beets are boiling, combine the vinegar and the rest of the ingredients in a saucepan.  Bring to a simmer then cover and remove from heat. Cool the cooked beets until you can handle them easily. Peel and cut in half then slice in 1/4-inch slices. Put them in a bowl and pour the warm vinegar mixture over. Allow to stand until cool, stirring from time to time. Put in jar's and refrigerate for up to 3 weeks.

Note: If you find these nineteenth-century pickles are too "pickle-y" for your taste, you can bring them into a more modern taste by draining the liquid, heating it to a simmer and adding 1/2 cup sugar. Pour the liquid back over the beets.


Return to Overview Essay
at May 13, 2019
Email ThisBlogThis!Share to TwitterShare to FacebookShare to Pinterest